ADVOCATES UNITED FOR HUMANITY
There are multiple causes that we at Advocates for Humanity support. We need to create greater awareness in our mission in stopping abuse and violence against humanity and your assistance is vital in continuing our mission. Help in our mission by sharing the causes listed here and on social media. 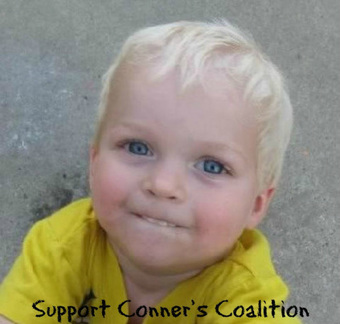 Conner's Law's goal is to raise public awareness for child abuse, to lobby for change to Kentucky legislation, as well as changing the laws nationwide, regarding child abuse and to create a national public child abuse registry...  Employers are not the only ones who have the right to know if a person commits a violent act against a child. We as parents have a right to know!!!

Conner Bachuss was just two-years old when he was abused so badly, he died from his injuries. The man charged, Ronald Sounder II, was his mother's boyfriend at the time. Initially charged with murder, he took a plea deal for second degree manslaughter and received a 10 year sentence. Mashanna Bachuss Waggoner, Conner's mom, has been fighting ever since to get stricter sentences for fatal child abuse cases.

Waggoner stumbled upon an article about her son and immediately connected with the writer. Donna Kshir who was a columnist with the Detroit Examiner and the president of Dreamcatchers for Abused Children based out of Michigan.  Ms. Kshir used her influence in the growth of gaining national support for Conner's Law, making fatal child abuse a violent crime in Kentucky. Waggoner and Kshir created a close friendship that will stand the test of time, as both women continue to be a voice against violence towards children.

"I definitely think a child's life is worth way more than 5 and 1/2 years and I'm very glad that with his name that will change and make sure that that doesn't happen again," she said.

Two prior attempts left Conner's Law in a House committee where they died. This time, she turned to Danny Carroll, the freshman senator for help.

"Nothing against Mr. Caroll, but it is his first session, so I really just thought we are going to get our name out there, you know?" She said. "Maybe get some more sponsors, more supporters, I had no idea it would go this far this fast."

Bachuss Waggoner told Local 6 it was extremely emotional to watch the Governor sign it in person.

"I know Connor's name and case will live on and has done good," she said. She added that she plans to help other state's strengthen their laws, too.

Mashanna Bachuss
12-05-019
​RE: Ms. Donna Kshir
​
​To whom it may concern:
Donna Kshir is advocate for abuse children everywhere. She spreads awareness by using her voice to gain attention to child abuse cases. She worked diligently to spread awareness for Conner Bachuss’s case and for Conner’s Law. Donna wrote articles about the case and law, shared petitions, shared updates about the progress, and design a website for Conner’s Coalition.  Donna has given a voice to victims of child abuse and their families by writing countless articles and books. She also published and contributed to a series of book for victims and survivors called Unmasked,Unmasked 2, and Unmasked 3.  Donna Kshir is a pillar of her community for helping with several local projects. She was raised money, and raised awareness for different issues in her community.  She also started a local writing group to give people support and an outlet to express their selves.  Donna has also partnered with other child abuse advocates groups to spread awareness about child abuse.  Donna Kshir has been a significant individual for awareness and growth for child abuse advocacy.